“It is now up to you to preserve the flame of remembrance. I am encouraged to see so many young people gathered here for this solemn occasion. This is the largest youth contingent ever to observe Vimy Ridge Day in Canada, and it is an honour to share this moment with you. We put our faith in the youth of this country because you can renew our hope and vigour for tomorrow. You have also renewed our commitment to learning from history, and I want to thank you on behalf of all Canadians.”

With the support of the Royal Canadian Legion, Army Cadets Corps from across the country will take part in the various Remembrance day ceremonies and events within their respective communities.  It is with their historic military and regimental ties, that Army Cadets have a strong desire ato show their support and pay respects on Remembrance Day.

Army Cadets in Manitoba are often called upon to participate in a variety of other commemoration events within their communities.

On Easter Monday in 1917, the four Divisions of the Canadian Corps, fighting side-by-side for the first time, captured Vimy Ridge during the First World War.  The Canadians succeeded where others had failed. The victory at Vimy is said to be 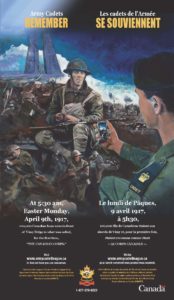 Canada’s “coming of age” as a nation. The victory, however, was not without a price. There were more than 10,000 casualties. Of those, 3,598 gave their lives.

Ceremonies take place annually on or around Vimy Ridge Day at the National War Memorial in Ottawa,  in cities and towns across the country and in some cases, Cadet Corps will travel overseas to visit and attend ceremonies at the Canadian National Vimy Memorial in France.

In 2010, Canada marked the “end of an era” on Vimy Ridge Day with the passing of our last First World War Veteran.  Youth were challenged to take up the torch of remembrance so that the memory of those who served between 1914 and 1918 would never fade.

In 2011 marking the beginning of a new era, The Royal Canadian Army Cadets commemorated the Battle of Vimy Ridge for the first time.  Since then, Army Cadets all across Canada rise to the challenge each year to commemorate the anniversary of the Battle.

In Manitoba, we commemorate the Battle of Vimy Ridge on the Saturday preceding April 11th of each year.

Should you wish to advertise this date and commemoration in your Corps Community the National Office can provide assistance with that.

To promote these events the national office created the poster pictured here.  Copies of these posters are available upon request.

Contact Maxime Corneau at 1–877-276-9223 or by email to: commsofficer@armycadetleague.ca

COMMEMORATE THE BATTLE OF VIMY BY WEARING YOUR VIMY PINS

For any other questions,  contact the national office of The Army Cadet League of Canada by email:commsofficer@armycdetleague.ca

A variety of learning tools about Vimy have been made available:

Find out more about those who fought and how you can commemorate them :

By searching You Tube using keywords relating to the Battle you will find many other interesting and educational clips.

These t-shirts created for the Army Cadet Vimy Commemoration Events are available to order through our kit shop.  The front of the t-shirt was left blank to provide the option for the corps to place their own logos if they wish. The cost is $10.25 for sizes SM- XL and $12.25 for XXL.  Click here to order.