Latest news from across the branch.

Seasons Greetings To our friends near and far, whatever the season means, know that you are appreciated and we DO make a difference. Thank you to all of our supporters, volunteers, sponsors, Cadet and CIC for a great 2022! #strongertogether Linda Wall President ACLC – MB

After his Cadet career; and while becoming a successful and respected automotive mechanic; Terry enrolled in the reserves in the Cadet Instructors Cadre and progressed to becoming the CO of this CORPs, not once but twice before moving on to other roles in the CCO. Terry has formally been in the DND training side of the partnership, and throughout the years has spent countless hours advocating and promoting the partnership between the DND and League.

Terry has provided sound advice, encouragement and tirelessly advocated for the ACLC in Mb to step up, evolve and fulfill our fiduciary duties to Army Cadets. Terry has been a community advocate for 19 Portage, in the local community and ensuring that the Cadet Program is supported and recognized at the community level right across Mb.

Terry has recruited many of our committee members both at the local and the Branch level, not just in Portage La Prairie, but right across the province; including our current Branch President Linda Wall, and was a huge support to our past President as Mb ACLC as we pivoted to become a respected, effective, and relevant participant in the Cadet movement.

We will be holding our Provincial AGM on June 4, 2022! Stay tuned for further details!

Seasons Greetings from our National President

Our national president has sent along the following: 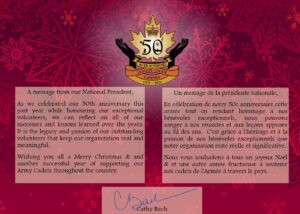 The ACLC provincial branch Presidents in attendance at the National AGM – April 27th – with WO Moogly Tetrault-Hamel, the Indigenous Advisor to the Chaplain General and his daughter Azia.